Northern People / Stories, legends and myths / The tale of Olmmái 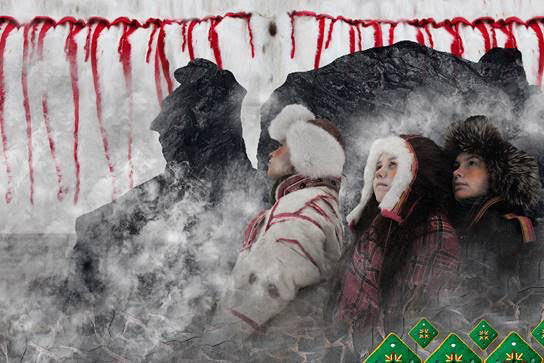 Artist Inga-Wiktoria Påve, whom last year (2016) won Riddu Riđđu’s Young artist of the year, has created a collaboration with the youth stab of Riddu Riđđu and the photographer Eirin Roseneng, with roots from Manndalen. Together they have had a photshoot on a snowy day in the areas around Manndalen to showcase the story of how Olmmáivággi/Manndalen got it’s name. Later on the photos were edited by Inga-Wiktoria Påve. The story was told by Harry Solhaug in the year 1995.

A long time ago, there lived a man in Manndalen called Olmmái. He lived on the edge of a big plain. To the east, just below the mountain foot, lived his neighbors. Their houses lay in a row so they had a good view over the plain towards the house of Olmmái.

Towards the north, the view was blocked by a ridge stretching across the valley as a giant nose. The ridge rose over 100 meters towards the sky. Here, with a view of all life around the plain, lived Ravald. He built his house upon the ridge. It became a dark and scary place, but perfect for survival. He had no friends. If someone approached his house, the dog would scare them away. Then everything fell apart. As I will tell you more about later, Ravald survived. Marks from his digging is still visible today. The ridge is called Gilvátgiedjunni.

As mentioned, Olmmái had placed his house on the edge of the plain, near the river. The house was big, it resembled a large goahti (turf hut), or maybe even more a pyramid, because the house had corners, 50 meters high and 50 meters in diameter. Here Olmmái lived with his family. His wifes name was Mare, his son Skidu and his daughter Njivi.

Olmmái hunted in the valley and fished in the river. He was particularly fond of standing by the waterfall, watching the salmon make viral jumps to try to challenge the water. Here they caught salmon, lit bonfires and cooked the salmon in pots, which you can still see the remains of today. 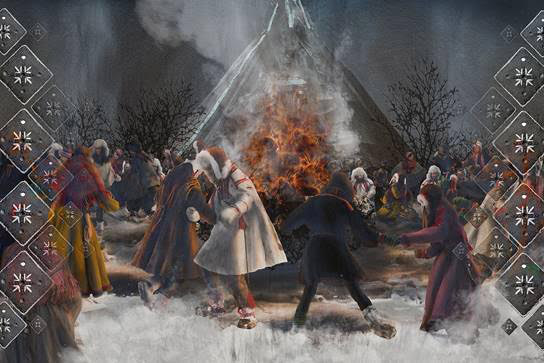 Olmmái’s wife was a daughter of Jettankaillen. The Jettankaillen did not like Olmmái. He was both angry and dissatisfied because his daughter had married a mandalite. She almost became queen in the royal kingdom of the Sea. One day Jettakaillen stood up on a mountain and searched the fjord all the way to the Great Sea, to see if there were fish and whales in the fjord. His ship stood with the grapnel outside, moored in Skipsbukta, always ready for set off. You can see the ship and the grapnel today.

One night, there was a full northwest storm and high tide, he saw a massive wave coming in from the ocean. On top of the wave sits the sea king Áhpi. The king had heard that Jettakaillen was supposed to have a nice daughter. Now he would see her if she could be good at queen in his kingdom. Jettakaillen brought his daughter as a crew. They went down to Skipsbukta, boarded their ship, and sailed out to meet the sea king. Outside Njurtjárga, he met the king of the sea and shouted out:

– There must be high society people whom travel so decorous! 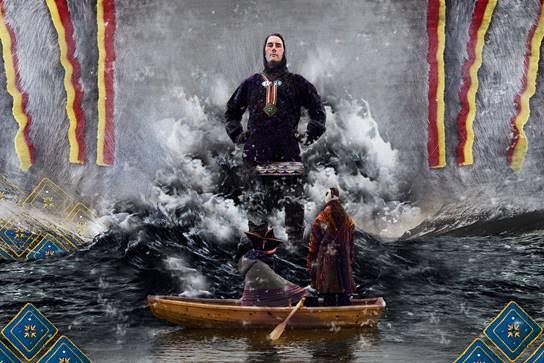 – I’m the sea king, Áhpi, who owns all seas from east to west and from south to north. No king in the world has as big a land as I, said the king of the sea, sending one of his waves along the ship to Jettakaillen.

– You must have had important errands when you have taken the time to visit us coastal lapps , said Jettankaillen.

– Mare Mare, said Jettakaillen to her daughter. – Stand so that the king of the sea can to see you properly.

Mare went straight to the bow of the boat and appeared to the King of the Sea.

When the Sea King saw Mare, he silently cursed the ocean wave who had fooled him there.

– The only thing that wave can do is to lapso that the fish in front becomes sea sick and must vomit. That wave has no sense of what qualities a good queen should have, he thought, and immediately saw that she was not a wife for him. This is a woman who can sew “Komaga” (traditional sami shoes) and cook “Komagsmurning” (leather lubricant for traditional sami shoes) Maybe she can cook rennet to the animals, but she is not a queen.

However, he could not offend Jettankaillen so he shouted:

– Your daughter is both kind and beautiful. I have not made up my mind yet. Once I’ve done that, I’ll come back.

He saw that the weather had changed direction, and now the wind blew outwards Gáivuotna. It fitted him well. He thought:

– It’s best to get away from here as fast as possible. He decided to go to Helgeland. There he had heard about seven sisters waiting for suitors. ”

He sailed out the fjord, went south and never came back.

Mare waited and waited for Áphi, the sea king to come and ask her to become his wife. She looked forward to be the queen in the kingdom of the sea king. She waited for so long that the neighbors started calling the place where she stood for Marebakken. Today, the hill is called the Marebakken after Jettakaillens daughter.

Olmmái in the valley had also heard of Jettakaillens daughter. He traveled on frequent visits to Jettakaillen. Jettakaillen did not like this. Some mandalite should not marry his daughter. Olmmái told Jettakaillen about wild hunt, salmon fishing and the nice dish he could cook.

– What’s the name of the dish? snorted Jettakaillen.

– Gisell,”said Jettkaillen, that’s something we mix together and give to the pigs!

He thought to himself that he would put an end to this suitor. So when Olmmái went on a wild hunt, the Jettakaillen sneaked up where he knew the valley was narrowest. Olmmái had to pass here.

Here he collected lots of stone. When Olmmái came, he pushed the rocks down the mountain side in hope to hit him. This will be the end of that suitor, he thought. Olmmái saw the stones coming so he avoided being hit. He did not know that it was Jettakaillen who in vain wanted to end an unfitted suitor. Even today the mountain is called Bahávárri – the evil mountain 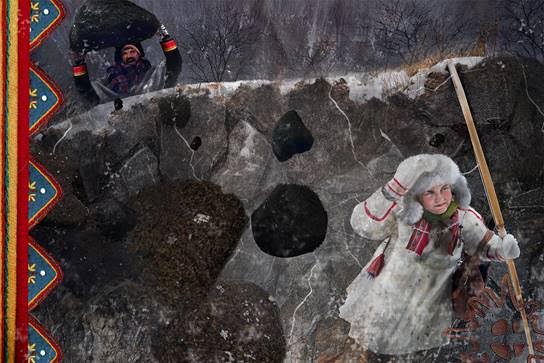 Finally Mare said yes to Olmmái and moved to the valley to Ravald. They had two children, one boy and one girl. Mare, however, could not forget the Sea King Àhpi.

A long time had passed. The two children had become teenagers, and one day they invited Olmmái reindeer hunting. They went up the valley, and spent the night on a large rock. Olmmái had left the provisions there on previous trips. The stone has later been used for the same purpose, and here hunters and others have been able to sleep safely because no predators or enemies have been able to come surprisingly at them. The stone is called Áitegállu, which in English means Storage stone. After a good night sleep, Olmmái and the children went on. They passed Bahávárrevuolde, under the evil mountain, but nothing happened. Jettakaillen had stopped pursuing Olmmái. They continued inwards Àvččevággi and up to Čahca, and the mountainside. They entered a cave, which is now called Njivi after the name of Olmmái’s daughter. The cave was spacious with plenty of space for all of them, and they lived here throughout the reindeer hunt.

At home in Ravald, Olmmáis wife Mare was starting to get bored. She could not forget about Áphi, the sea king. He was such a handsome man to look at. Maybe she should have waited longer before she married Olmmái and moved to the valley.

– It would have been nice to meet the sea king one more time, she thought.

One afternoon she is relaxing outside her house watching the mighty Gáisi mountain rising towards the sky , she got the idea.

– If I climb to the top of Gáisi, then I may see the sea, and maybe get a glimpse of the Sea King Àhpi. She left. It was far to go. When she reached the top of the mountain she sat down, leaned back and scouted out over the landscape if she could see the sea and the sea king. 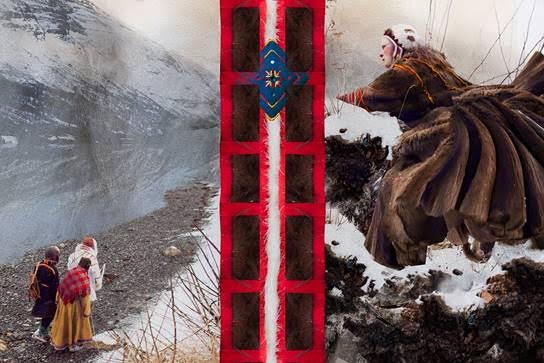 Olmmái and the two children had finished the hunt and were on their way home.. They reached where the valley was narrowest by Àvčče. At the mountain they stopped and looked down the valley to admire the view.

Then it happened: A gleam so powerful that everything turned into stone, flew over the mountain Then the darkness subsided over the valley. A fierce storm and snow rose. The darkness and snowy weather lasted thousands of years. It filled up the whole valley, the snow even reached over Gáisi. Everything that lived became dead and cold winds blew over the icy plains.

He is standing there today, Olmmái and scouts out over the valley. His two children did not manage the hard work of standing so long. They fell down both. Njivi, the daughter of Olmmái, lasted longest of the two, but fifty years ago she fell down. The boy Skirdi fell down a few years before.

You can best see Máre, the woman of Olmmái from Jávri, the Water. She is sitting there leaning against Gáisi and scouting towards the sea and the sea king Áhpi.

As mentioned earlier, Ravald survived the big bang. Today the plain is named Ravald, a well-known ghost site. Even today if somebody approaches the house of Ravald, they are scared away. Therefore, Ravald means ; A dark place where there are ghosts.

He, Jettakaillen still stands scouting over the fjord, if herring and whale would come in. The boat stands ready in “Skipsbukta” with the grapnel out ready for set off. The names of the remaining places tell stories about the giants who lived here before our time. Before atoms were blown and everything was turned into stone.

Bonki – the last pagan in Lyngen